For Masonry Services and More, Beautiful Horizons, Inc. is Your One Stop Contractor 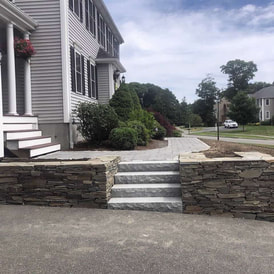 Beautiful Horizon Incorporated is not your typical contracting company. The company’s owner, Celso Dias, left Brazil to pursue a better, more stable life in America 15 years ago, and has been living on the South Shore since. Celso began a landscaping business in 2006, mainly just mowing lawns and weed whacking. Over the years, customers began asking him if he could do other things with their property, such as fixing or redoing a walkway, patio, etc. Celso quickly realized that there was much more money to be made in masonry than landscaping. It also helped that there are many more landscaping companies, compared to the amount of masonry/outdoor design companies. It is very hard work, and not many people want to do it, so he saw it as a business opportunity to fill a void that no one else wants to fill.

He officially stopped his landscape business and changed over to masonry in 2014. However, even now, he is still more than just a mason. He will take on any outdoor design project ranging from leveling a yard, creating a wall or patio out of nothing, steps out of scratch or repair, outdoor kitchens, and much more.

Celso provides a vision for ways and solutions to improve your property, whether it be residential or commercial, and then he makes that vision become a reality. What makes Celso and Beautiful Horizons stand out, is that he can do many things that other masons can’t do. Back in Brazil, he had 9 different licenses for trades, including electrical, mechanical, and plumbing, so he can do everything in one project – the wall, patio, and add lights to the final project. Whereas other companies would have to hire an outside company to add the lighting and electrical aspects, he can absorb multiple projects into one.

Business was not always so easy for Celso and Beautiful Horizon. Back when he was just starting out, the biggest challenge he faced was gaining the customers’ trust, and essentially becoming a salesman to sell himself and his abilities as to what he was able to do. It was difficult for him to maintain a steady stream of projects without having many credentials in the business. But, once he was able to lock down a couple big jobs, and was able to prove to future customers how much he was capable of, his business began to take off. The majority of his clients have come from recommendations and word of mouth. It makes it much easier for him to sell his vision when he already has someone vouching for his abilities. It is still a very small business, employing only three employees, not including Celso. However, they have as much resources and, as I have seen firsthand, are much more hardworking than any of their competitors. Celso and Beautiful Horizon are the best at what they do, and if you or anyone you know are looking to make any kind of outdoor renovations, this is where you should bring your business.