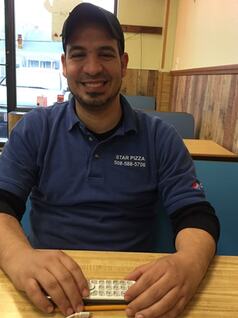 Throughout Bridgewater, East Bridgewater, and West Bridgewater where Star Pizza exclusively offers delivery, you can find at least one pizza lover in every household. Unfortunately for the pizza and pizzeria lovers in these areas, many have not heard of the hidden gem called “Star Pizza”. Star Pizza is a family run pizzeria that was established in 2014 by Atef Henin. Atef, unlike many owners is usually if not always the first face that you see upon entering his restaurant. He always has a smile on his face as he welcomes you in and gives off a very friendly aura as does his pizzeria, Atef originally from Egypt where he worked as an EMT immigrated to the United States in 2005 where he began to work for various food restaurants and pizza shops. In just a short span of time Atef became a manager in the restaurants that he was working in, effectively managing two restaurants at once. In his managerial positions Atef began to learn more about the everyday operations that kept a business running from food orders, to bills, to overhead and more which would give him great experience for the future. In 2014 just about 10 years after arriving to the United States in hopes for a better life for him and his family, Atef had purchased a beautiful location located in a little plaza at 43 N Main St, in West Bridgewater, Ma.

After the opening of his first location one of the toughest problems that Atef was quickly faced with was the issue of not only attracting new customers but of also convincing customers of the previous establishment to give his business a try. Even though Atef was faced with some adversity and challenges he had the wellbeing of his family motivating him to push through and persevere through any challenges that he faced. Within one to two months Atef began to see many new faces coming through the store, after asking a couple people how they had heard of Star Pizza Atef was pleased to learn that his company was doing great on online review sites such as Yelp, Google as well as Facebook. Due to this more and more customers began giving Star Pizza a try and according to Atef “many if not all always came back.”
​
After overcoming the initial challenge of getting new customers through the door “Star pizza is doing great” according to Ate. He attributes most of his success to his high reviews online, because of them he gets new customers daily and in his own words at that point “It is up to us to make them come back”.  When I asked Atef if he would do anything over from when he began in 2014 he took a very long pause and gave a resounding “no” when it came to the food and menu. He did state however he wishes he looked at larger locations so that he could do a little more with the store which he states “is still a possibility”.  When you enter Star Pizza you may notice that the workers seem very close and like they work well together, this is because Atef takes the opportunity to employ some of his family members as well. Atef states he does this for a couple reasons. The first reason is what we are all thinking he is a great guy that is taking care of his family by giving them opportunities to work in the United States. Also being the smart businessman he is, Atef realized that he could easily combat turnover rates and bad moral from workers by simply hiring family members that he knows have his best interest at heart. Because of this Atef is able to elude what he believes is the toughest part about having a business in 2020 which is in his own words “finding good and reliable labor”. Atef attributes Star Pizza’s success wholly to the quality of food that he produces and also the quality of ingredients that he uses to make the food. Because of this he believes customers will continue to come back, and more and more customers will be compelled to give his Pizzeria a high score on Yelp, Facebook, and other social media platforms. Because of this when I asked Atef “Has internet technology played a role in making your business more successful” he responded very carefully that “Yes the great customers who leave good feedback on the internet and my website have brought me some traffic but it would not be possible if we weren’t giving them good food”. He also states laughingly that “If I was to give them food that didn’t taste good, they could go on the same internet and ruin my business”. In the short time that Star Pizza has been in this location Atef and his family are extremely happy with the success and reception they have received from their customers so far, they hope to renovate the location, for example with new flatscreen tv’s where the menus will be displayed while also expanding the menu as well to bring in some new and younger customers.

Before agreeing to the interview, Atef jokingly let me know that he expects new business from this interview which I sincerely hope is the outcome of this article. Just to give a bit of an idea of how great the management at Star Pizza is, I will share a quick personal experience that I had with Atef and the workers at Star. I first came in contact with Atef while I began a new job at Metro PCS in the same little plaza that Star Pizza was located, he walked in the door and immediately asked for my coworker as if he knew him, because I was new I was a little confused and let him know that I was the only one in at the time. At this point Atef walked in and began to ask me all types of questions “How do you like it” “When did you start” “Where are you from” etc. If I remember correctly we spoke for about 10-15 minutes getting to know each other and Atef never mentioned he owned the pizza store next door which in hindsight meant a lot to me that he was genuinely having a conversation with me not trying to gain a new customer.

Before he left Atef jokingly asked me do I ever eat at lunch since he had not seen me come in next door, I let him know that I usually didn’t eat on break or I would bring in a snack, he laughed and told me “that was not enough” and if I needed lunch to stop in next door. My next shift I took him up on his offer and he demanded I take my slice of pizza for free ever since then If I was the slightest bit hungry I was going next door and giving Atef and the rest of the guys at Star Pizza my business. To this day months after I left my job next door to Atef’s I still order and I choose to drive in to say hi to the guys and Atef. When asked “where do you see Star Pizza in 6 months to a year” Atef humbly stated he only hopes that he “continues to have success and to see growth”. If you are in the Bridgewater area don’t forget to stop by 43 North Main St West Bridgewater, MA and give Star a try!