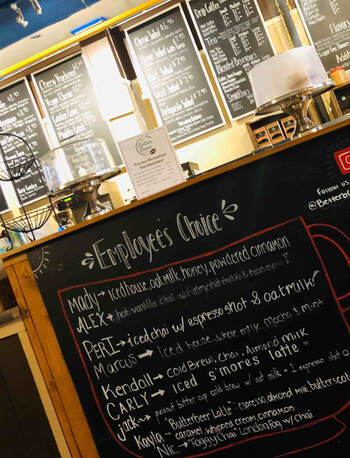 Kelsey Charland, manager and one of the owners of The Better Bean, speaks on behalf of herself and the other owner, Jason Hebert, on health, creativity, and providing a sense of community for the town of Bridgewater.

Q: Tell me about your business.
A: It began as a partnership with the original owners and a Permaculture company. They were going to schools and teaching children about the environment, in an effort to add eco-friendly ways of living to urban areas. They then saw this coffee shop and they were trying to sell under the last ownership. However, they were interested in buying it so all three of them within the partnership took over The Better Bean.

Q: What was it that made you want to start this business?
A: We just wanted there to be more of a sense of community.

Q: What was the toughest thing you went through when opening?
A: I think just keeping things interesting. We just took over another location in March of last year and one of the more difficult things is just understanding your customer base and their needs. The Bridgewater and the Lakeville locations are very different and have very different wants. The things that sell at one, even though only 15 minutes apart, sometimes have a very difficult time selling at the other.

Q: What is the toughest part of having a business in 2020?
A: The social media aspect, for sure. Keeping it interesting. Keeping it engaging. We are lucky, to have a lot of young people on staff that are very social media involved.

Q: If a customer was to choose between your business and three others just like it why would you suggest they at least give you a try ﬁrst? What makes you stand out?
A: I think that skill-wise, we do have an up on the competition. We put a lot more effort into learning the basics while also trying to be as modern as possible. We make it a priority to keep up to date on latte art because the quality of our products, is of high importance to us.

Q: What is the number one way you currently bring in new customers?
A: We now have a customer rewards program, where when someone comes in and purchases something ten times, they get a free item. We also try to give discount codes as often as we can, through social media.

Q: Has internet technology played a big part in your growth and making your company more successful?
A: Definitely for the younger population. Especially in a college town.

Q: If you had to look 6 months to a year into the future where would you like to see your business be?
A: The goals that we want to have achieved within the next year would be to create a younger vibe, as well as, to also get back to composting and seeing what else we can do to reduce our waste as a business.

Q: Was there something specific that made these areas stand out to you?
A: Jason worked at the college and was a customer before he bought the business, so I think that it just sparked an interest.

Q: Was being located in a college town a big selling point?
A: Definitely yes, it gives you that foot traffic that many places don’t have.

Q: From looking at the menu, I can see a variety of healthy options. Is healthy living of importance to you?
A: It absolutely is. We are actually bringing in a whole new menu with healthy options. Health, sanitation, and allergy awareness is something we are trying to move towards. We are also making it a goal to bring in more vegan and gluten-free options. We want to be as transparent as we possibly can be.