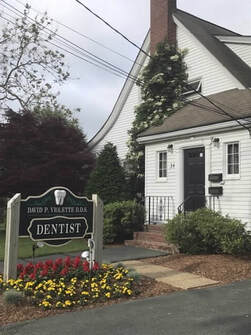 I had the pleasure of speaking with David P. Violette, D.D.S., who runs a successful, self-titled, dental practice in West Bridgewater, Massachusetts. He has been practicing in this location for the past twenty-eight years.

Dr. Violette grew up in Rehoboth, Massachusetts. At the young age of eleven, he decided he wanted to be a dentist after being inspired by his orthodontist. After graduating from Dighton-Rehoboth Regional High School in 1981, he attended Stonehill College in South Easton, where he graduated with a Bachelor of Science in Biology degree in 1985. He then moved to Richmond, Virginia and studied dentistry for four years at the Medical College of Virginia. He graduated with a Doctorate in Dental Surgery (D.D.S.) degree in 1989.

After moving back to Massachusetts right after graduation, Dr. Violette began working at the dental office of Drs. Cohen and Cavicchi in Whitman. He was employed there for two years and then worked for a short time at Dental Horizons in Swansea. He realized that he wanted to have his own dental practice, so he began his search for a local, older dentist who was nearing retirement. In 1992, he found the office of Dr. Richard Guidoboni in West Bridgewater, Massachusetts. Dr. Guidoboni offered to rent office space to Dr. Violette and allowed him the use of his equipment. It was two separate practices in the same building. Dr. Violette was able to start building his patient base. While it was slow going at first, through word of mouth from existing patients, Dr. Violette eventually built his practice to the point where he could buy out Dr. Guidoboni and become a sole practitioner. Dr. Guidoboni agreed to sell the dental practice to Dr. Violette in the spring of 1998.

Dr. Violette wanted to start his own business with a passion towards leadership, decision-making and a sense of ownership. Dr. Violette’s philosophy as a business owner includes having his staff be able to enjoy the financial and professional success that comes with their dedicated, and passionate, hard work. The quality of Dr. Violette’s dental practice is top of the line, between the care that is given to all his patients, and the personal relationships that he maintains with them.

A variety of services are offered, including routine dental cleanings, dental fillings, crowns, bridges, dentures and also dental implants. As a business owner, accommodating his patients and keeping them comfortable are two of his main priorities. As a result of the excellent care his gives his patients, he has been able to build on his practice’s impressive reputation. Through those patient referrals, Dr. Violette has been able to serve a large number of patients, far and wide.
​
It is fair to say that it is difficult for many different businesses to thrive in the current, post-Covid-19 environment. Being unable to see patients for three months during the shutdown has been very difficult for Dr. Violette. As a result of the pandemic, Dr. Violette has seen a reduction in the bottom line. The cost of personal, protective equipment and the new protocols of limiting the number of patients in the office at the same time has had an overall, negative impact on the dental practice. A year from now, Dr. Violette would like to see his practice at a more productive and staffed level.

Although Dr. Violette is satisfied where his practice is today, he has hopes of it one day expanding into a multi-doctor practice. In doing so, it would increase the patient base even more and more advanced technology could be used as a marketing tool. Anyone who gives Dr. David Violette’s dental practice a chance would be highly satisfied.