Leave Your Troubles Behind and Escape to Round Table Games in Carver, MA 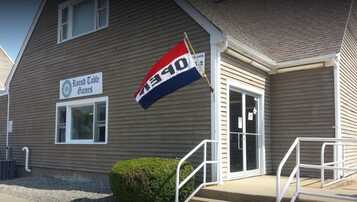 Round Table Games is a hobby store located in the Carver Square Shopping Center, in Carver, MA. They offer a space for players to come play games like Dungeons and Dragons, Magic: The Gathering, Pathfinder, and others. Founded by Chris and Candi Zahnzinger in 2015, the store was opened with the goal of creating a space in which people could walk through the door and leave their troubles behind, if only few a little bit. Round Table Games provides an escape to their players in a homey and welcoming environment.

Embracing a third space philosophy, they wanted to build a store that would help people find a fun environment with other players, away from work and home. That is exactly what they have accomplished at Round Table Games – every night you can find a myriad of games going, sometimes lead by Chris, in which potential players are welcome to drop in and have fun. They have thrived doing so, and continue to grow their player base. People are also welcome to come to the store with their own games and have a good time.

The environment and culture of Round Table Games has been built behind a huge effort Chris and Candi. They understand that many types of people want to play games with others, but may not know where or how, or may have challenges in the social realm – all players are welcome, as long as they are there to have fun. Round Table Games is all about hosting social games and fostering the sort of camaraderie that comes with that experience. Chris describes that feeling of joining alongside fellow adventurers as very satisfying, one that can’t be beat by staring into a phone or computer screen – even if get someone little too heated, maybe a little too angry – it’s an experience that’s hard to beat!

The business opened in September 2015; Chris had been working as system administrator, following a passion for customer service. They had been running a weekly gaming group for years, from early in the morning to after midnight, and it just kept getting bigger and bigger. Their kids were growing up, and getting involved in gaming as well. With a deep interest in gaming and gaming spaces, and seeing their children really come alive and grow in those spaces, Chris and Candi decided to take the risk to open Round Table Games. To them, it was a space where no one had to worry about religion or politics or what as troubling them, when you’re there you’re just trying to make the “biggest duck egg” or conquer the boss or whatever the game might be.

The store started out on a shoestring budget; sitting on a shelf in the store are dozens of games that they brought from home to start the building the space. They put together fixtures, tables, chairs, and decorations to bring it all together, and hoped for the best – and combined with their extraordinary talent for making players feel at home, the store is now doing great; if one visits their website, they have gaming events nearly every day, for all kinds of players. Creating a welcoming environment for all players is shown in other ways at the store too. When discussing why people would choose their store over others, Chris says it’s all about fit.

Chris and Candi want players to feel at home – but they do have to respect the rules, which means no walking around in your underwear! And they also want to build a store where effort is rewarded. They have a robust rewards system, something they developed out of their humble beginnings, trying to figure out the right amount to give away to players. They developed a system of leaderboards, in which when people show up to play, they get points on the leaderboards that they can use to spend in the store. They also run tournaments in which rewards pools are divvied up amongst all players; that way, if you participate, you get to walk away with something. Chris says it has cost them some of the more competitive players, but a key part of their philosophy is that they stick to building their culture and don’t try to fight over other customers: if a player is more competitive and wants to play winner take all, they just aren’t a good fit, and would be happier elsewhere. They also have a rule in which you can’t bad mouth other stores; Round Table Games fosters a positive environment however it can. This has resulted in a great deal of customer loyalty.
​
Round Table Games is not just a space to play – it’s a space to buy games too. Chris works extremely hard to research the latest in gaming and hobbies, and keeps a well curated inventory. If you come in and ask, they will be able to point you in the right direction, and if they can’t, they will find where to send you. Chris stresses that when customers come in looking for a game, he understands that those people have already used the internet to research it, and may even know more than he does about it – but he’s more than happy to talk about it with you, and try to find the best way to help you with what you need.

Visit Round Table Games today, or give them a call; they’d be happy to have you!

Round Table Games is located at 128 Main Street in Carver, MA.