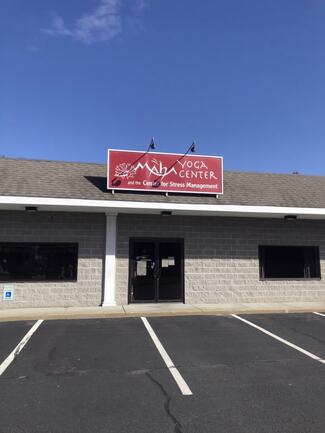 The Maha Yoga Center in Bridgewater MA Is the perfect place to go for anyone looking to relax and unwind, physically and mentally. The owner, Diane Lagadec, has been operating the Yoga Center since 1993, Diane built the first Studio herself alongside her husband, but since then the Yoga Center has relocated to an area a bit farther away from the hustle, bustle, and traffic found near the center of Bridgewater. I interviewed Diane about her business, and when I asked her what inspired her to start the business, she said “I just really wanted to share what we knew, because I know people are stressed, as a retired school teacher I know how important it is to share knowledge for the benefit of everyone”. I also asked Diane why she chose this line of business, and she said “I had been teaching yoga for years, and my husband and I realized we had friends that had skills like yoga, meditation, massage therapy, and tai chi, so we wanted to bring them all together to one spot”. Diane has made the Maha Yoga Center a staple in the Bridgewater community through her active community service and involvement, she has commited herself to the people of Bridgewater.

Clearly the creation and upbringing of the Maha Yoga Center took a lot of willpower and hands on work, when I asked Diane what the toughest thing she went through while opening was, and what inspired her to persevere, she said “the hardest thing I experienced while getting started was a lack of help, I thought more people would join me when I started but It didn’t work out that way, also we have barely any money when we got started, we had to build the first studio ourselves”, Diane is truly a self-made and motivated business owner, and its apparent that a lack of money and support wasn’t enough to stop her from creating the successful business she has today. I asked Diane if there is anything she would change from day one knowing what she knows now, and she said “when you consider the fact that small businesses don’t usually last long, I’d say that I’m happy we are still standing and doing so well, there isn’t much id do differently because I’m so happy about the way everything worked out”, if Diane had made many missteps when she began creating her business, it probably wouldn’t be standing today, therefore, there isn’t much she would change from the beginning. I also asked Diane what the hardest part of having a business in 2020 is, and according to her  “The hardest part about owning a business in 2020 is the taxes, it seems like we work awfully hard and still have to give a lot away, but we have a great community and we have overcome many challenges”, Diane has found that small business owners encounter a large amount of taxes to go with their success, but she has been able to overcome this challenge with the support of the community.

The Maha Yoga Center separates itself from similar businesses through price and diversity of services offered, while surrounding yoga studios have single class prices ranging from $13 to $20, the Maha Yoga Center offers a more reasonable rate. When I asked Diane what separates her business from its competitors, she said “because we are very reasonable, our single class drop in rate is $10”, and absolutely no long term commitment is required, the management of the Maha Yoga Center wants to ensure that no one gets trapped in an inconvenient financial situation, a testament to its integrity as a small business. There is also a 10 class-card option for only $80, and private restorative yoga sessions for $55, one of Maha Yoga Centers’ best attributes is it commitment to affordability, because the people who work there don’t want to exclude anyone from what they have to offer.

When I asked Diane what the number one way she brings in new customers is, she said, “Word of mouth works the best, a business person once told me that advertising is essentially like throwing money out the front door, word of mouth and being active in the community is key, everyone who works here has to be an active part of the Bridgewater community and complete community service”, by having all Maha Yoga employees engage in community activities and service, Diane is making a statement, that to be a part of the Maha Yoga Center, is to be a part of the surrounding communities, and those community relationships helps her bring in new business. I also asked Diane if internet marketing has played a big part in the growth and development of the Maha Yoga Center, to which Diane replied, “The internet is a good tool, we have a web page and I send out a weekly information message to everyone who works here, it’s great for communication during snow storms, but in terms of marketing, I prefer word of mouth, not technology” Diane has found that her connection with the community has proven sufficient in terms of the marketing and growth of The Maha Yoga Center, and besides communication with employees and use of the Maha Centers web page, technology does not play a big part in her success. In response to her point of view on technology, I asked her if she believed that technology could play a bigger part in her business if she had the right tools, and she replied “No, I don’t think so, maybe if I was more technologically savvy I could make better posters, but that’s all I would do” Diane has successfully run the business the same way for a long time, and she currently sees no way that an increase in the amount of technology that she uses to run her business would benefit her, she finds that a strong relationship with the Bridgewater community is enough.

Diane’s response to my question about the role that technology will play in the future of her company, prompted me to ask where she sees her business going in the next six months to a year, and she replied, “I’d like to see the business still standing, I don’t feel the need to expand because I like our location, and I’ve seen many businesses expand too much and then collapse, also there is basically no traffic near our current location which is a huge advantage”, Diane doesn’t need to expand her business to be satisfied with the direction its heading in, as far as she is concerned, as long as the business is still standing and engaging with the community of Bridgewater, she is satisfied. Since Diane wants the business to continue on its current path for years to come, I asked her if over time she would like to increase or decrease her involvement with the business and become more of a passive owner, and she said, “I’d like to continue my current work level, I’m the one who does all the checks and handles the various aspects of the businesses so I’d like to do it until I can’t”, Diane currently has no intention of slowing down her involvement with her business, she would like to continue leading by example and handling as much of the workload as she can, for as long as she can.

​The Maha Yoga Center also offers an impressive amount of additional services, including a yoga teacher certification class, mediation classes, massage and bodywork treatments, concerts, and counselling sessions.  The Yoga teacher certification class includes 200 hours of information and training based around the anatomy, physiology, psychology and philosophy of yoga. The meditation classes include a meditative healing sound bath, which surrounds you with deep immersive and relaxing sounds. The massage and bodywork services include aromatherapy, reflexology, core stone massage therapy, and several other treatments focused on the ears, muscles, and spirit. Some upcoming concerts includes a solo acoustic guitar performer as well as a flute and poetry reading night, although varying musicians are brought in to perform different sets. The various types of counseling available includes individual, family, and couples counseling, as well as hypnosis, health, and wellness coaching. The well trained and fully licensed staff of the Maha Yoga Center share a passion for health and wellness, and they wish to share that passion with both the Bridgewater community, and anyone else who is willing to take a chance and walk through their front door.

Visit Maha Yoga Center at 992 Bedford Street #5 in Bridgewater, MA, because as the owner says, “The best way for people to experience what we have to offer, would be to walk through the front door”.