Looking for a Barber in Bridgewater? Try Champions Barbershop 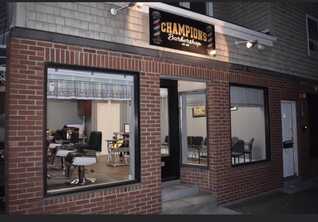 Locally owned and operated, Champions Barbershop, was founded in October of 2017, by Justin Roberts. Justin has lived in the area for the past ten years, eventually choosing to open his own barbershop, after working for another barbershop location in Stoughton for a period of six years. The rationale for choosing Bridgewater as the location for his business was due to the growing population and local college, and relatively unsaturated market in the barbershop industry in Bridgewater.

Justin chose the barber industry from a long-time interest in the field and previous trial in other fields. After attending college, majoring in criminal justice, and working several other jobs, he decided that a career in criminal justice was suitable for him. Instead he followed his passion of barbering, where he went to barber school and began working in the field. He has worked in the field for a total of eight years to date.

According to Justin, one of the toughest parts of owning a business in 2020 is the availability of information. In the age of information, all competitors have equal access to advertise on the internet and spread the word about their business, making it difficult to stay relevant in the people’s minds. However, one of the largest ways he has brought in new customers is through the use of technology and social media sites. Remaining active on social media sites such as Facebook and Instagram, has propelled his clientele base, where he believes if he had not, he would not have grown as fast as he has since launch two years ago.

In choosing Champions Barbershop over any of the competition, one would receive the high-quality service that Justin intends for his business. One goal of Justin’s is to maintain high-quality haircuts and service to his customer base. When asked he stated, “I think I give city haircuts at small town prices,” stressing his excellent haircuts at an affordable rate, no matter who in the shop is cutting their hair. Along with the promised service, he is dependable and located in an easily accessible area for drivers and walkers alike. Through ample parking he facilitates the driving customer base, as well as residing in a close proximity to the Bridgewater State campus, appealing to a younger customer base. Stressing the consistency and dependability of his haircuts is of the utmost importance to Justin, as in his industry finding these two qualities in a shop or barber is hard to attain.

In the long term, Justin hopes to continue growing to eventually open a larger shop, with the purpose of accommodating more chairs and hiring more barbers. At launch and for the first nine months of operation, he ran the business solo. Looking back, Justin remarked that one change he possibly would have made at launch was hiring one extra barber, though it is difficult to promise consistent work that early in the business. Today, he has grown to having four chairs and multiple employees in his shop. He would like to remain in close proximity to Bridgewater State University, while still maintaining high quality service and expectations of his business.

Because of the service-related nature of the industry, if given the opportunity, he would not take a passive role in management. His goal is to cultivate the culture that he believes his shop should be run, and the best way for him to accomplish this goal is through direct interaction with the business. In his eyes, the best way to maintain the excellence he expects from his shop is to closely monitor the culture and quality of service the shop is producing.

In summary, Champions Barbershop is a rapidly growing locally owned business with the focus of maintaining high quality, consistent, and dependable service for its clientele.