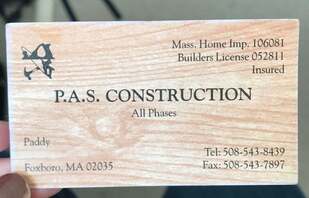 I had the great pleasure of interviewing Patrick Geoghegan, who more commonly goes by Paddy. Paddy is the sole owner of P.A.S Construction, and an experienced carpenter, starting his business in 1989. He is based out of Foxboro, Massachusetts, but does business throughout the South Shore. From kitchens to remodeling and finishing basements, P.A.S Construction has a well-acclaimed history of projects and line of work. Paddy is originally from Galway, Ireland and came to the United States mainly to play Gaelic football/Irish football in 1983, stopping in 1996 when his first daughter was born.

He back and forth between the United States and Ireland for Gaelic football seasons between the years 1983 to 1986, until he officially obtained his green card in 1986, and has been here full-time ever since.

Paddy began his interest in his job-line back home in Ireland. His father was a carpenter, so he continued the family tradition and did carpentry in high school and after school, as well. He did work on the weekends, holidays and summers, working for a company in Oughterard, Ireland that made doors and windows. He also worked for a local contractor building houses during the football off-season. Here in the United States, he started as a subcontractor, doing commercial type work for stores like Bradley’s, CVS, Strawberry’s, a previous supermarket chain called Purity Supreme, Child World, Toys R Us, and additionally for the Mass Lottery in Braintree, all for a company called Mullen and Associates.
​
Paddy obtained his construction supervisors license in 1989, which allowed him to begin his business. The main reason for starting was to go out on his own, make more of a profit, and have a bigger impact on the community. He mentions that when starting out, it took some time to build his network, having contacts, and getting his name out to the public. Although he has had great help in the past for heavy projects, he hasn’t found anyone to keep on full time, so he has kept it a “one man show since then.” Normally, he hires an electrician or plumber when needed. He has obtained many contacts from a large retail home improvement company for his work and has always been hired for projects through word of mouth and connections. He has done some current work for two local news anchors, Adam Williams and John Atwater. He also built a porch for former Red Sox player Tommy Harper!

Some challenges he has encountered with COVID-19 is the use of masks in homes when completing projects. He says, “Early on, no one wanted to have someone in their house unless you were working outside. No one wanted to do anything inside early on but now with masks and social distancing, people are more comfortable.” The pandemic slowed his business down for a bit, putting various projects on hold that are slowly resuming. Although the pandemic brought some challenges, he has been able to overcome them steadily.

When it comes to using internet technology to help boost his business, he is open to creating a website that could help showcase his work. His current network has been built on word of mouth and his past experiences. He uses email and texting for communication and his projects. He is open to using social media platforms but is not completely drawn to this idea since he has a steady network and is a small business, only himself involved.
​
When asked about a customer choosing between him and three other businesses, his answer is simple, yet effective. He does a good job, and he does it correctly. He has great references that can back him up. He is local, and his reliance on word of mouth and trust of his customer to build his network has worked well for him since the beginning. He hopes to see a manageable increase of business within the next six months to a year. He says, “It would be nice to stay busy and keep working and create quality work for all.”

P.A.S Construction is based in Foxboro, MA.